The medinas of Morocco are a vibrant and hectic places, where streets are narrow alleys between two and three-story buildings crowded with people and donkey carts. There are scooters noisily weaving in and out of this traffic and even the occasional car that barely fits. 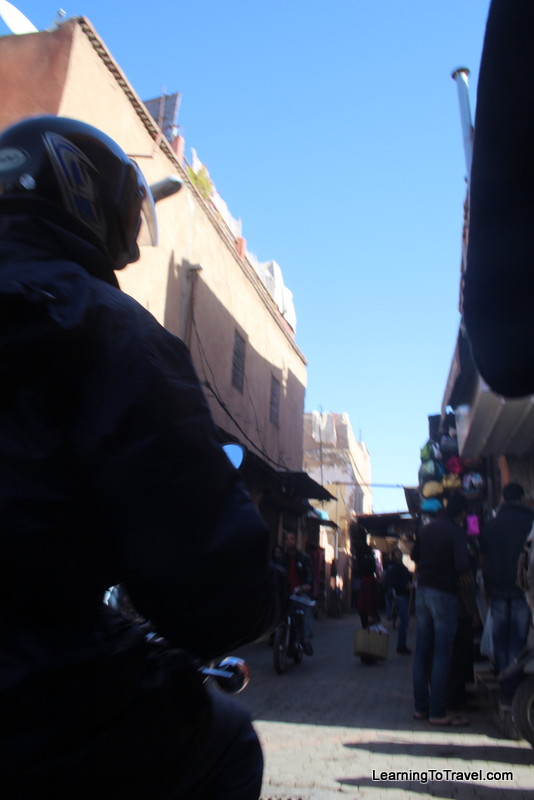 This was a huge change from our recent European wandering and we definitely felt like we were back in Africa again. The colors and the crafts of the souks were vibrant, colorful and beautiful and I loved them. 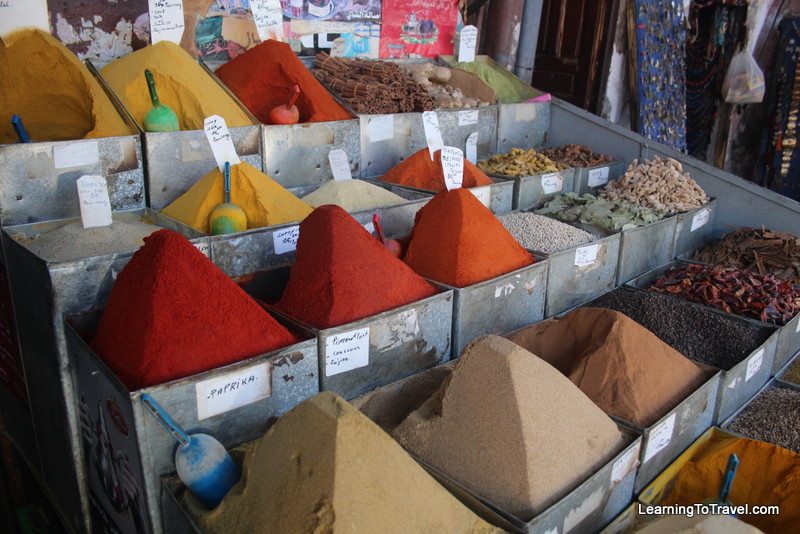 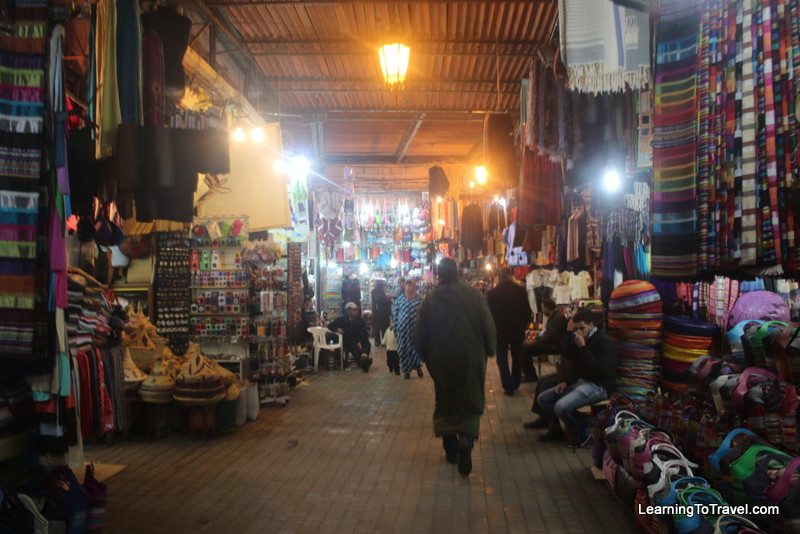 But the energy and hecticness is also exhausting and after a bit of time I was happy to return to our riad. Riads are the common kind of hotel in the medina (the old city). Like most buildings in the city, there’s just a non-descript door in one of these alleyways, 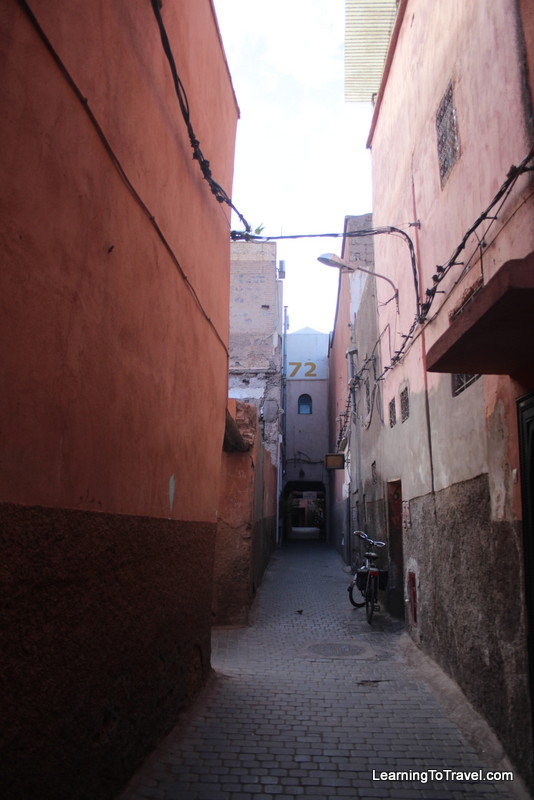 but when you enter you are greeted by an open air courtyard with furniture and usually a fountain or pool, surrounded by hotel rooms. 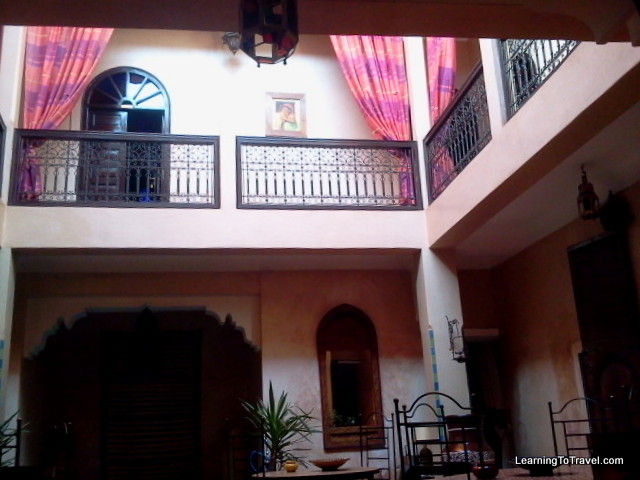 Because there are no windows to the outside you can tell nothing about the inside from the outside and (thankfully) you can hear almost none of the noise from outside in your room. Its like an oasis, a calm in the center of the storm. Because of this, picking a good hotel is key.

In Fez, we had a very different experience of staying in a normal second-floor apartment with windows opening onto the alleyway. This was a completely different experience, being a bit more in the community, but also affording no respite except for the rooftop terrace, which most buildings in the old town areas have.

Because the streets are like narrow chasms, a lot of the sun is blocked when you are at street level, but up on the roof, you can soak up the intense sunshine. 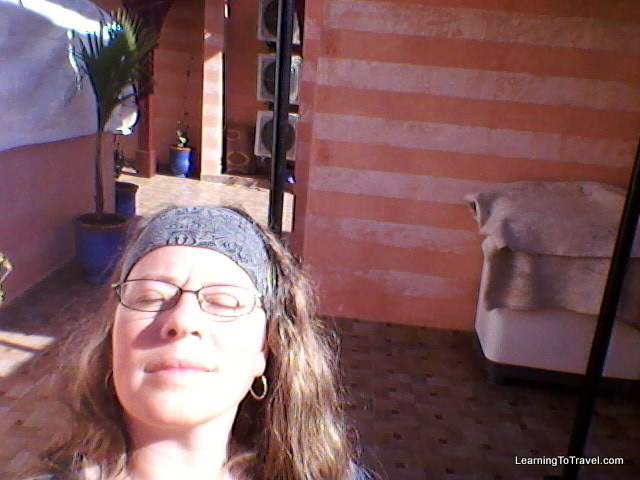 The view is a sea of rooftops punctuated by the rectangular minarets of dozens of mosques. It was an interesting place to be during the call to prayer, as the call emanated from the minarets. There was nowhere you didn’t hear it, not even your riad in most cases. 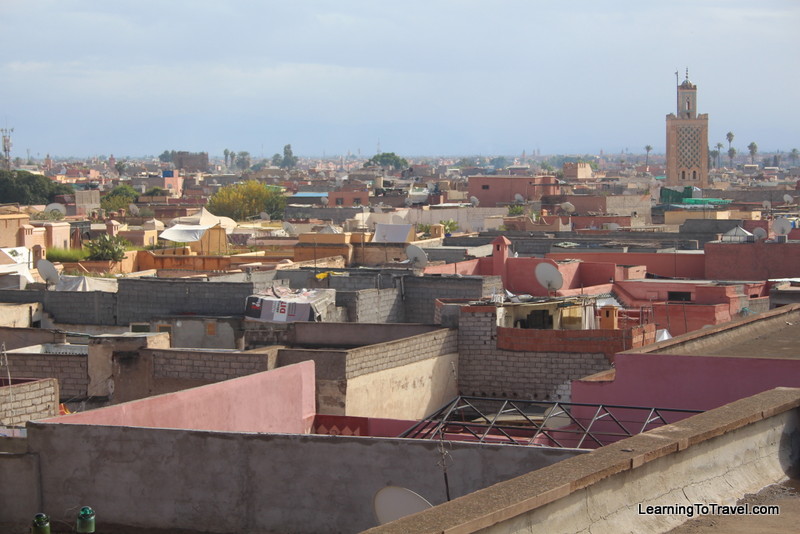 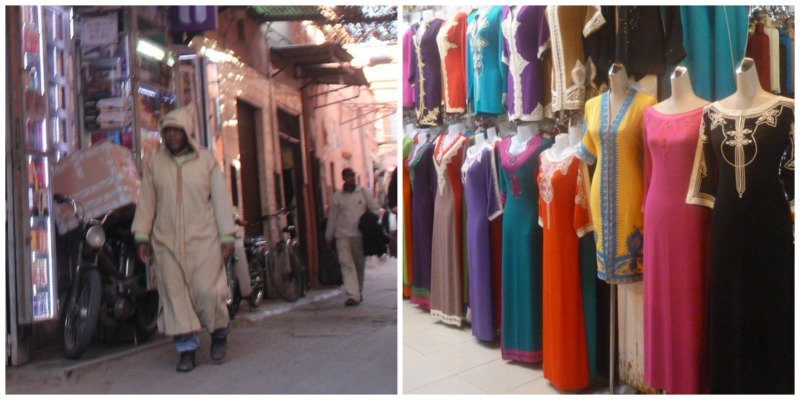 I’ll be honest I wasn’t a big fan of most of the food I tasted in morocco, but the mint tea and the fresh-squeezed orange juice ($0.50!) were highlights of my trip. 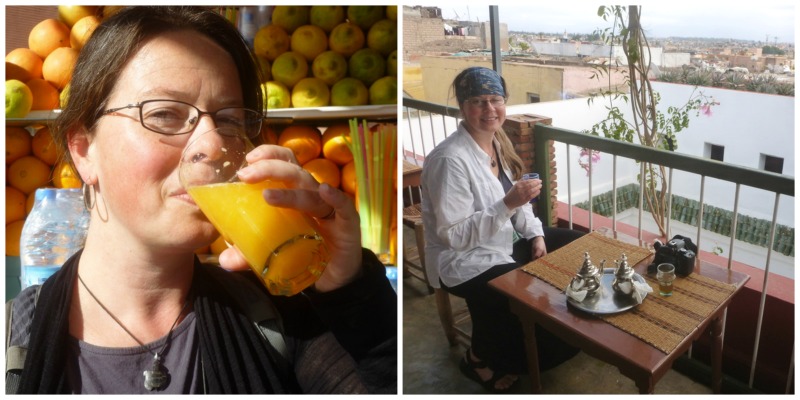 In Marrakech, the center of activity is Jamaa El Fna square. 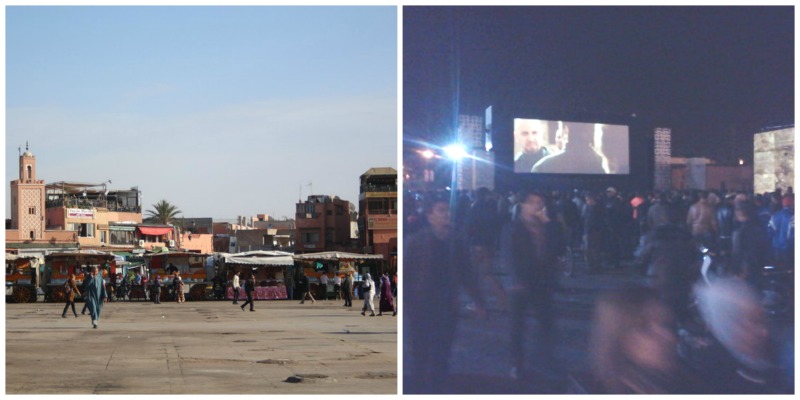 Particularly in the evening, you had the feeling it was like everyone’s living room. (There was even a film festival while we were there so it was especially crowded.)

All day there were snake charmers and henna dealers targeting tourists, but there were also food tents, games, storytelling & performers of different sorts attracting lots of locals as well. 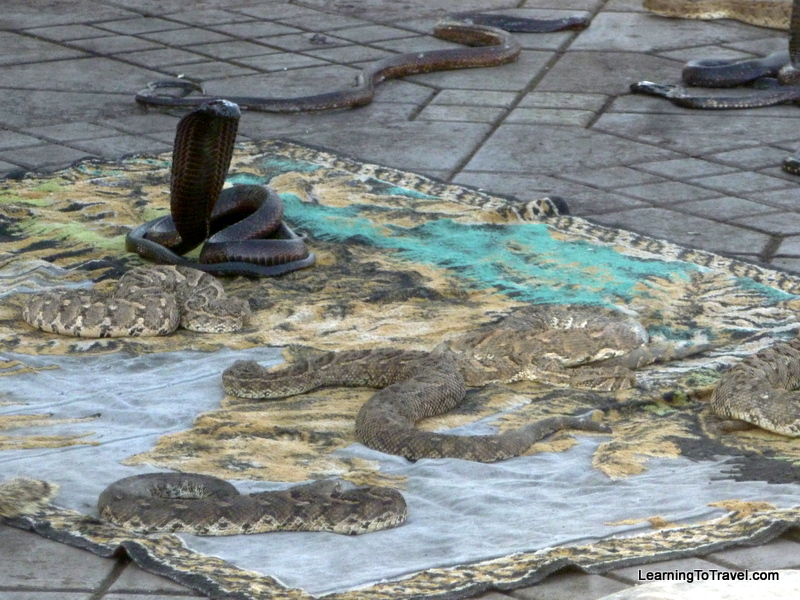 One particularly amusing one to watch was fishing for soda..like many such games, a lot harder than it looks. 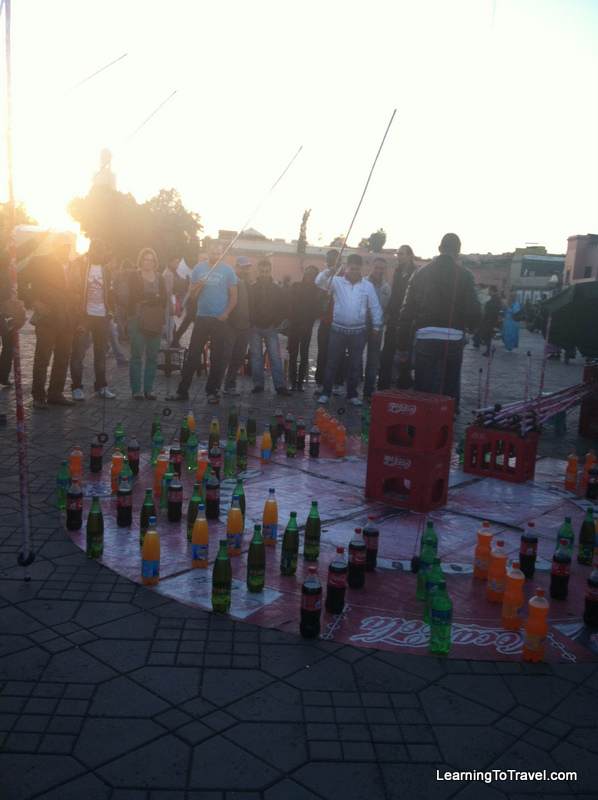 The square was also the best place for finding fresh orange juice. There are more oranges in Morocco than I’ve ever seen. 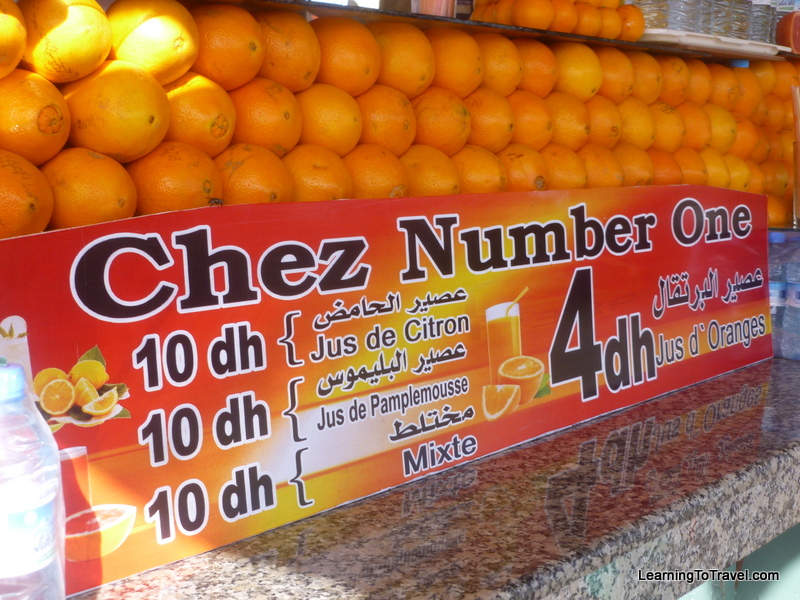 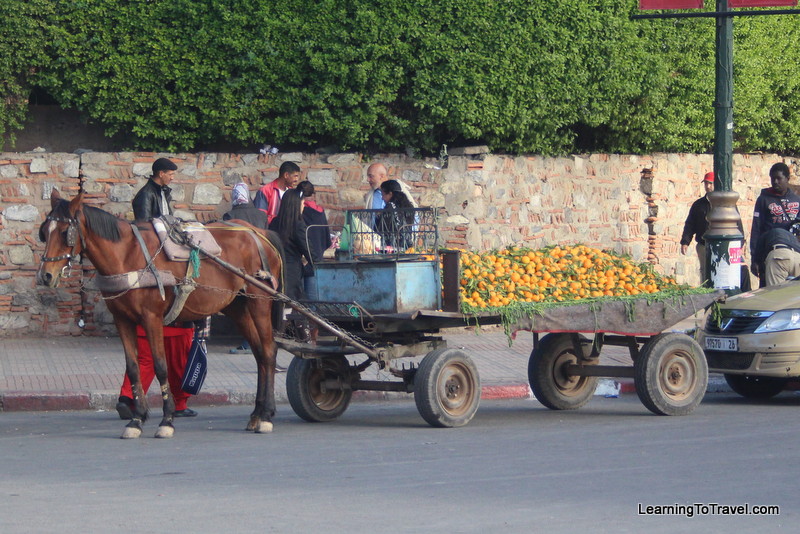 As much as I loved certain things about Morocco, the colors, the crafts, the orange juice, its not on my list to return to. Here’s my best explanation of why.

We are used to being asked for money and relentlessly asked to buy things and we don’t love that, but we’re ok with it. I won’t always say yes, but I don’t mind being asked for things, what I do mind is being tricked. I hate being tricked or lied to. I did not feel respected here. Our experience in Morocco, in Marrakech in particular, was that people didn’t just ask, they hounded. They would grab your arm and guide you into their craft stall under the guise of giving you directions somewhere else. They would take your hand in a friendly manner and suddenly you have henna, even though you’ve already said no and they agreed. (And even though they say it will last 2 weeks when they ask you to pay, it lasts 24 hours.) They would tell you that the few dollars you’ve given for something you didn’t ask for in the first place (a photo with their snake), is not enough and you need to give them more. This is not how I like to travel, I like to talk to people but every time I talked to a stranger it turned out they weren’t just being friendly and it just became not worth the risk or energy to me.

This is hard for me to admit. I like people and my default is to trust. I know a number of people who have genuinely loved Morocco and I went excited and prepared to love it – and I’ll be honest, I didn’t. We were ready to leave before our plane tickets said it was time and to sort of seal the deal, the day before we left we had our iPhone pickpocketed in a somewhat tricky way.

I am glad we did visit Morocco – there are some amazing things to see. I had some great experiences and did meet a few great people (see Mohammad and Michela below who we shared soup with in the Fez henna souk), but I’m not putting it on my list of places to return to. 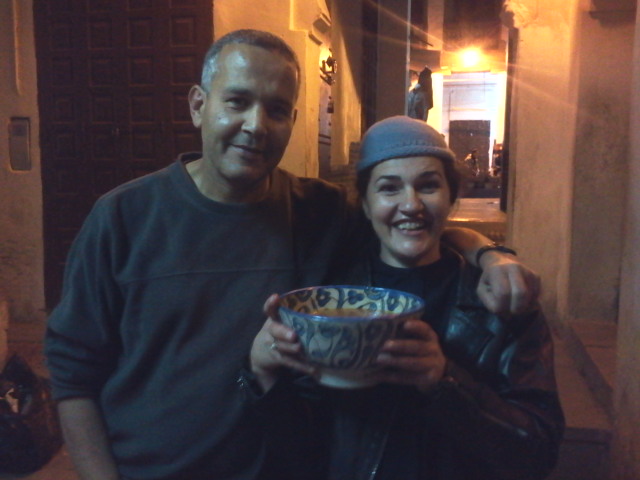