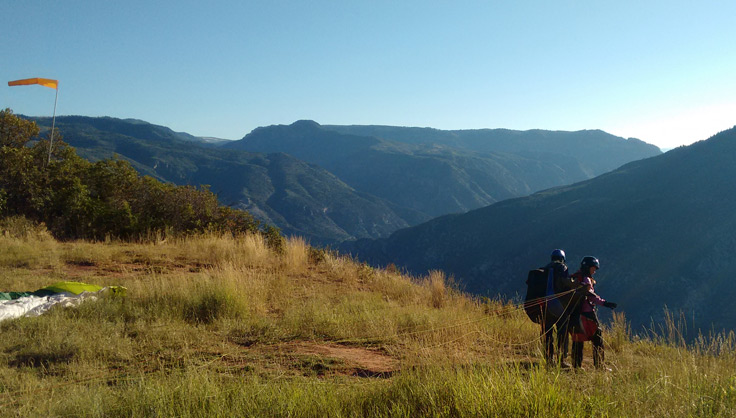 Joyce and I just returned from a two week vacation of road tripping from national park to national park in Southern Utah. On our way back we decided to spend some time in Glenwood Springs, Colorado.

As I was researching things to do in Glenwood Springs I came across paragliding and suggested it to Joyce, at first she was not so sure but the more she thought about it the more she wanted to do it. So once we arrived in town we booked a flight for the next morning with Glenwood Adventure Company.

Our flight was at 8AM which meant we had to be at their office at 7:30AM in order to watch a video and sign a waiver. The whole process is very rushed which is probably good because it does not give you time to think about the fact that in a few minutes you’ll be running off the side of a mountain.

With waivers signed we were to head up the mountain for our flight but as we headed for the door the guy in charge basically says, “By the way, I know you paid to have your flight photographed but we don’t have a photographer working today.”

This news, delivered at almost the last minute, was very frustrating for us.

Paragliding is not something we have ever done and probably will never do again so it was important for us to have photos taken which is why when we booked the flight we paid $40 extra to have it photographed. I understand issues come up but it would have been nice to be informed of this detail when I talked to the guy on the phone the night before. Because Glenwood Adventure Company let us down we had to make due with photos from my phone.

Once we got to the launch field the team of instructors we’d be flying with quickly began laying out the gliders and preparing us for our flight. Before I knew it I was suited up and ready to fly. But first I was able to watch Joyce’s take off and shoot a little video of it:

If you watch the video you can see that you actually don’t run off a mountain, rather you are lifted off the mountain as the glider takes flight. Because of this there is not the surge of adrenaline I was expecting, in fact the launch and flight where very smooth and almost zen like.

As we drifted over Glenwood Springs I felt as close to flying as I’ve ever felt. Much like a hawk or falcon that glides on thermals almost effortlessly.

I would encourage anyone to give paragliding a try. It is not scary or as much for thrill seekers as you might think. I can understand why folks get a passion for it and spend their whole lives taking to the skies.