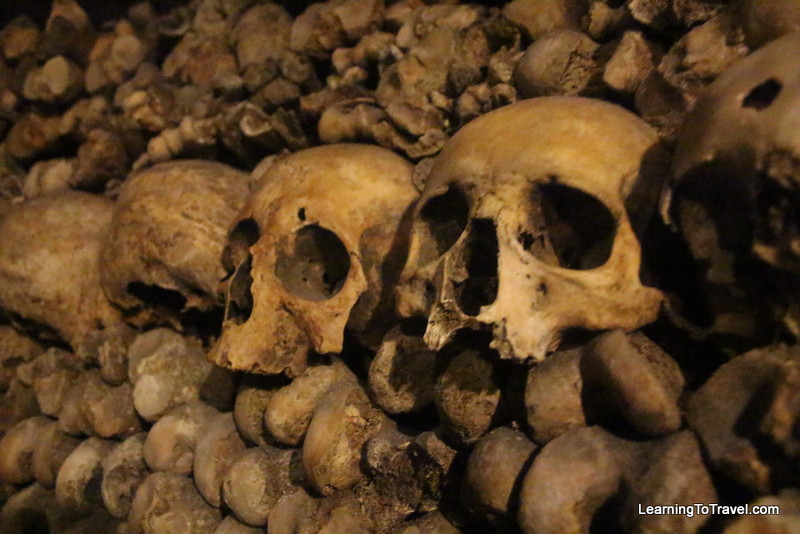 In Paris, what was originally a quarry for mining building materials has become something much more fascinating. I honestly knew nothing about the catacombs before we went on the tour. Daryle got us signed up. It turned out to be a really interesting experience. 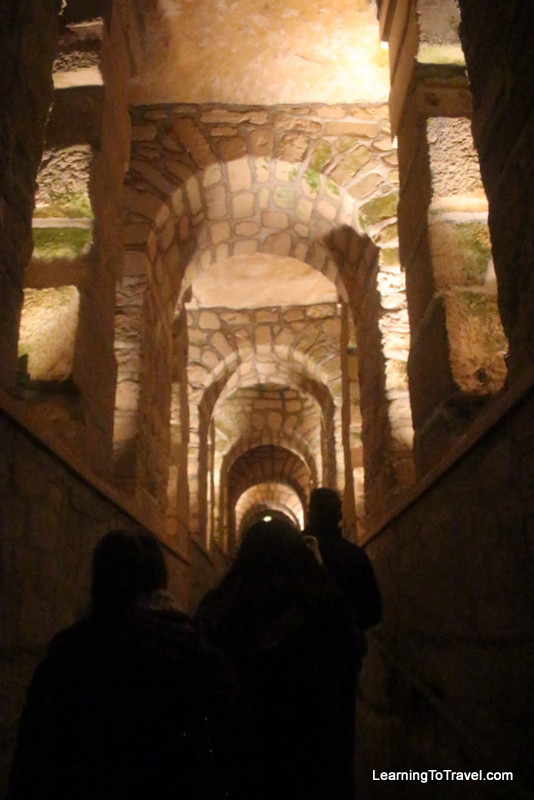 In the 1700s, the ground under Paris looked like Swiss cheese, and they started having issues with buildings collapsing. They have shored up some of the tunnels by building walls and filled others in, but you’ll notice that buildings in central Paris still don’t go above 8 stories. 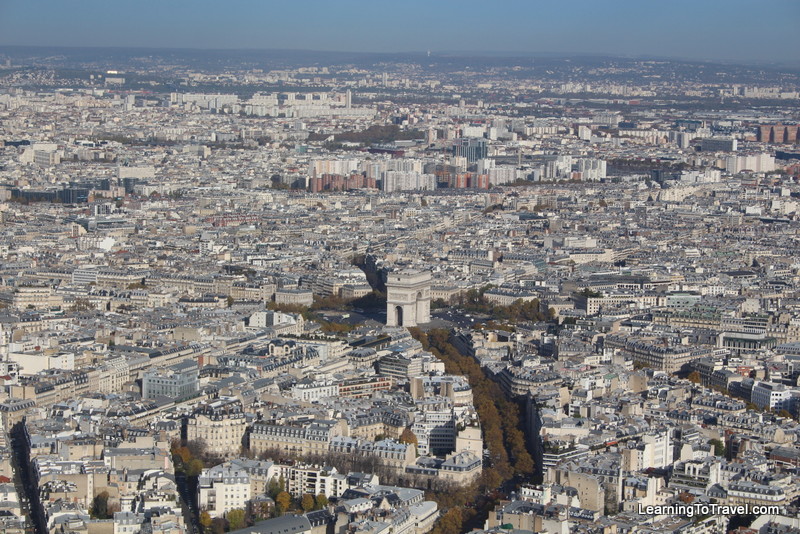 When religion was no longer outlawed, people started burying their dead instead of burning them, so suddenly, they needed space to bury a lot of bodies. In a stroke of genius, someone decided the center of Paris was the best place for a new centrally located cemetery. Called the Cemetery of Innocents, this area eventually took in so many bodies that there were some problems.

In 1785 the cemetery was deemed full and closed. At this point, there were bodies piled 6 meters above street level. Yep, I’d say it was full. Obviously, there were quite a few health and safety issues here (the largest market in the city was located just outside the cemetery…), and there are some pretty disgusting stories your tour guide will be happy to tell you should you get the chance to visit. To fix the problems, they decided to take all these “above-ground” bodies and stack them in the tunnels under the city. 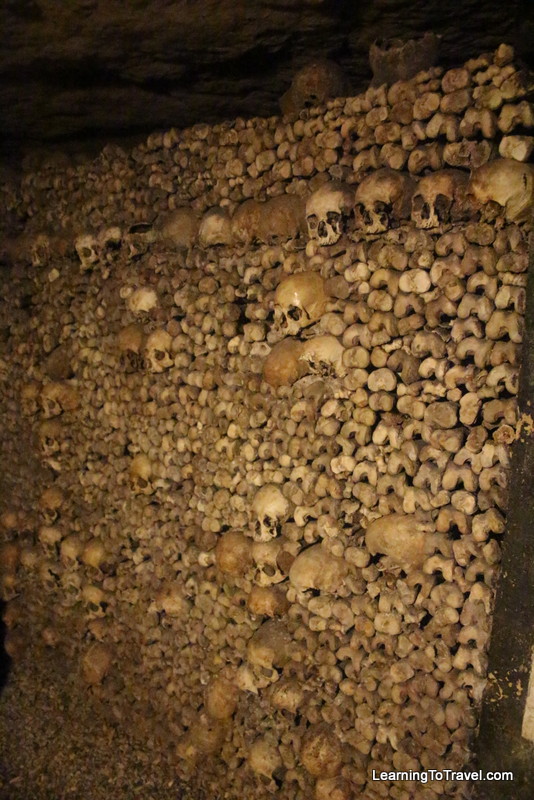 At dusk each night, a priest would bless the ground, bodies would be dug up, loaded onto a cart, covered in a black sheet, and carted to the catacombs where they would be carefully stacked by a team supervised by one man, the Viscount de Thury. In the beginning, bones were stacked very neatly. The stackers were careful and creative. Designs were made. 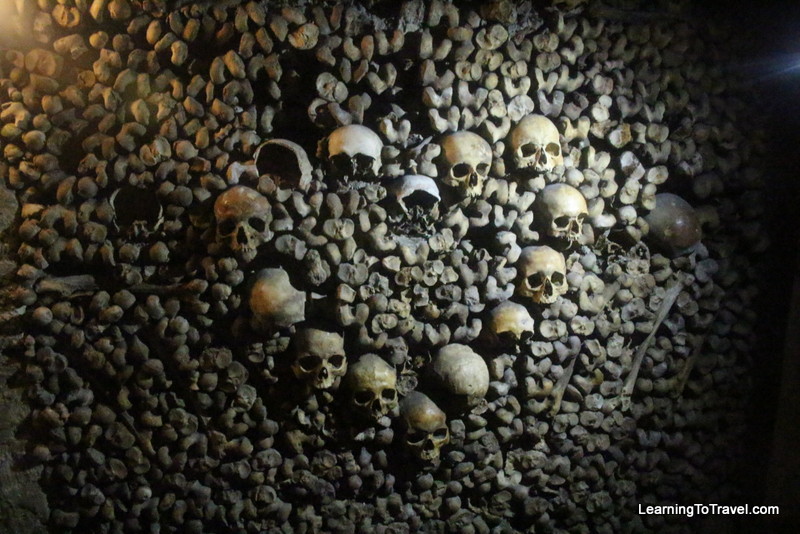 In general, they used femurs to form a wall and skulls for decoration. Then all the rest went behind that.

As time went on, stacking got less precise. There is 800km of tunnels under Paris, and 300km of them are lined with bones 3m deep on each side. 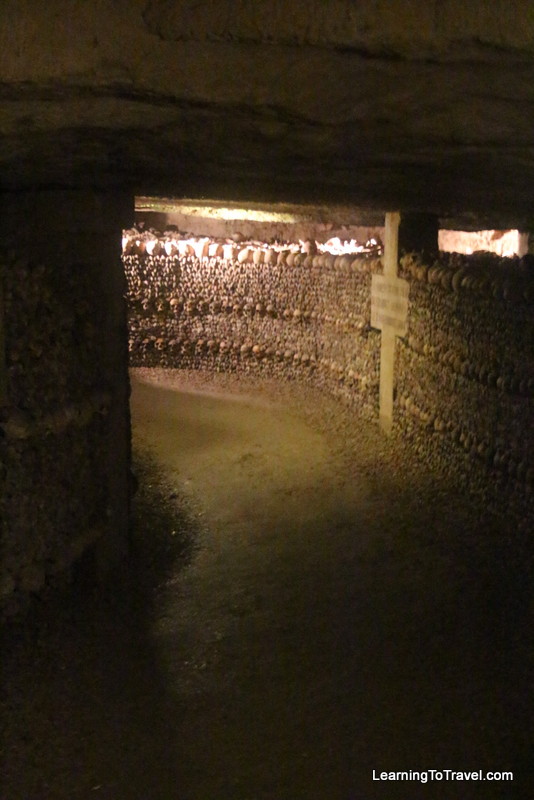 It took 50 years to move all the bodies from the cemetery to the catacombs, and in the end, the bones of 6 million people were “buried” in the Paris Catacombs. And they’re still there.

In addition to the sections of stacked bones, the catacombs have served as the location for dinner parties of Louis XIV, complete with a full symphony. During WWII, they served as a bomb shelter as well as hosted the headquarters of both the Nazis and the French Resistance. It turns out that unbeknownst to the two parties, the two headquarters were only located one tunnel apart.

More recently, university students held parties. In 1997 there was a rave with 6000 students held in the catacombs. Even though parties were outlawed at that point, and today it’s illegal to enter the catacombs, rumor has it there are still secret parties. You have to have your headlamp and slog through the mud to get there, but I am sure that is half the appeal. There’s a whole group of folks called cataphiles who just love the catacombs and can’t seem to stay away, despite the hefty fines for trespassing.

These tunnels have all kinds of myths, legends, and true stories that make them fascinating. Love stories, lost treasure, the whole bit. This is a unique place that I think is definitely worth a visit.

And a few additional photos: Here are a few of the carvings in the catacombs made by Francios, whose last name I’ve forgotten. Unfortunately, he was supposed to be working on shoring up the walls, not creating art. Interestingly, he was killed in a cave-in. Maybe if he’d been doing his job… But did leave some impressive sculptures, including this one of a prison in Spain where he spent 5 years. 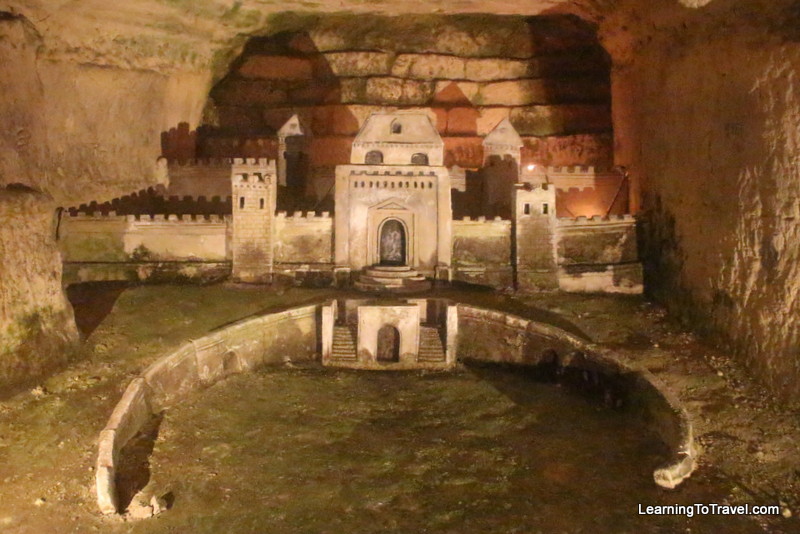 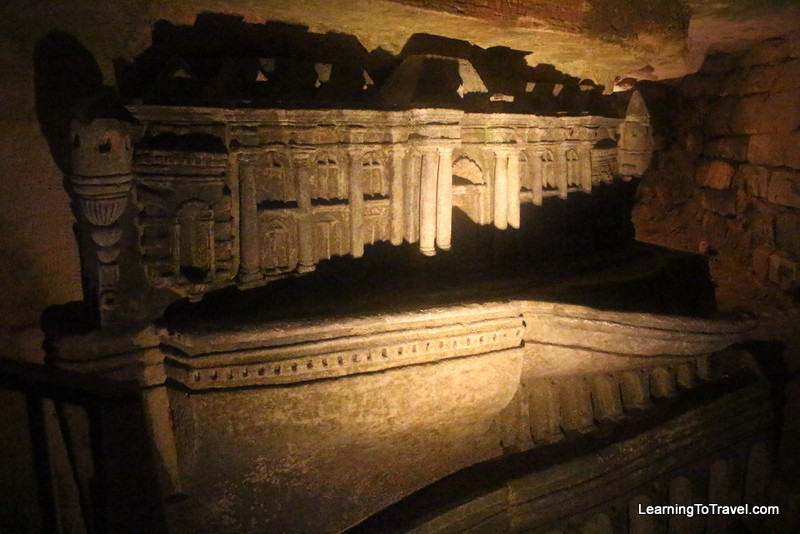