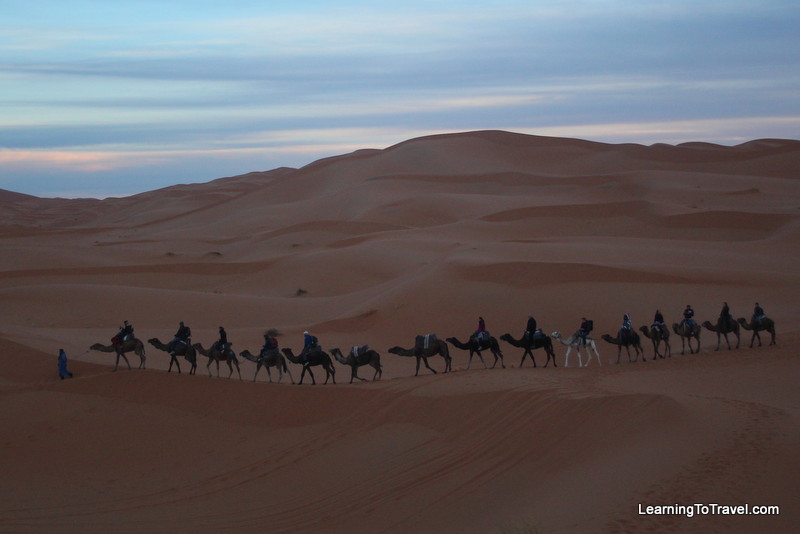 One of the challenges of travelling only by public transport is that we tend to see far more of cities than countryside. Since I’d consider myself a bit more of a country girl, this is a serious drawback. One decent way to experience more of the rural side of a country without renting a car is to sign up for a good tour. It can be cheaper than renting a car and more importantly, there are a number of countries we’ve been to where renting a car and driving is just plain scary.

We had the opportunity to take a tour in Ireland and it was fantastic. All tours are not created equally however, so it pays to hunt down some reviews before signing up.

When we arrived at our hotel in Marrakech, we were presented with the option of a 2 or 3-day tour to the Sahara. As it included not only the chance to set foot in the Sahara, but also to ride a camel, we couldn’t say no.

It turned out to be a pretty poor tour, but the sites we saw were still spectacular.

We started by visiting Ait Ben Haddou, a fortified city (or ksar) along a former caravan route that is now a UNESCO World Heritage Site.

It may look familiar as its been used in the shooting of quite a number of movies (Gladiator, The Mummy, The Last Temptation of Christ and The Jewel of the Nile to name a few),  as well as the pilot episode of Game of Thrones.

We also got to see a real live oasis – they do exist and they look like this. 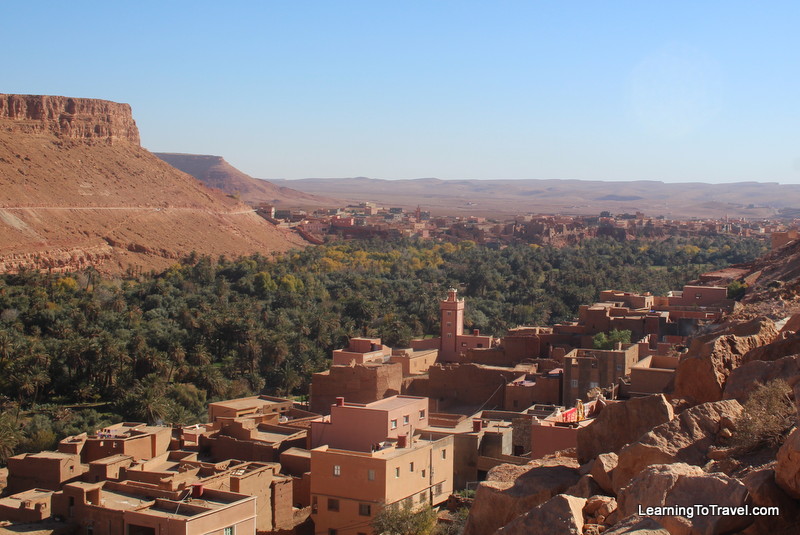 We had a brief introduction to how Berber rugs are woven by women (yes, they did also make it as difficult as possible to leave without purchasing a rug.) 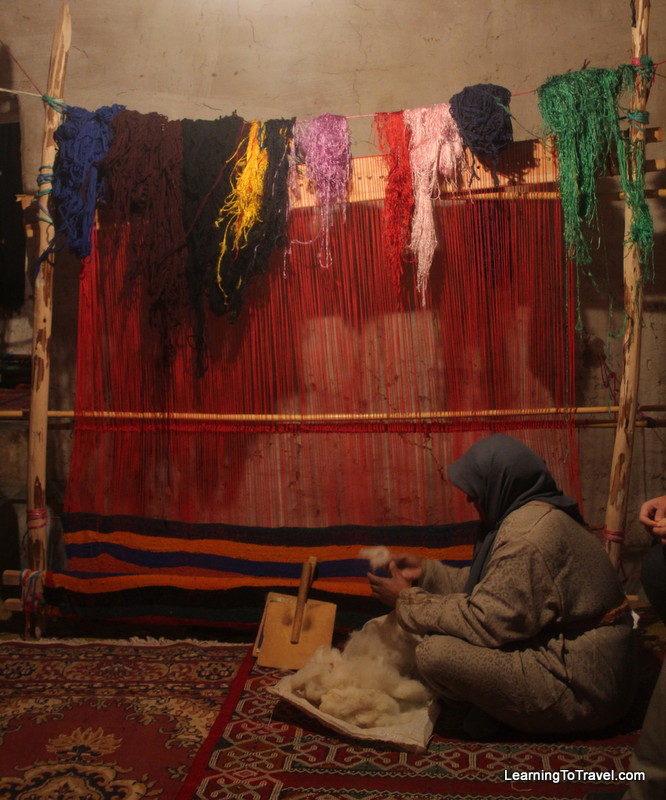 And a quick visit to Dades Gorge. 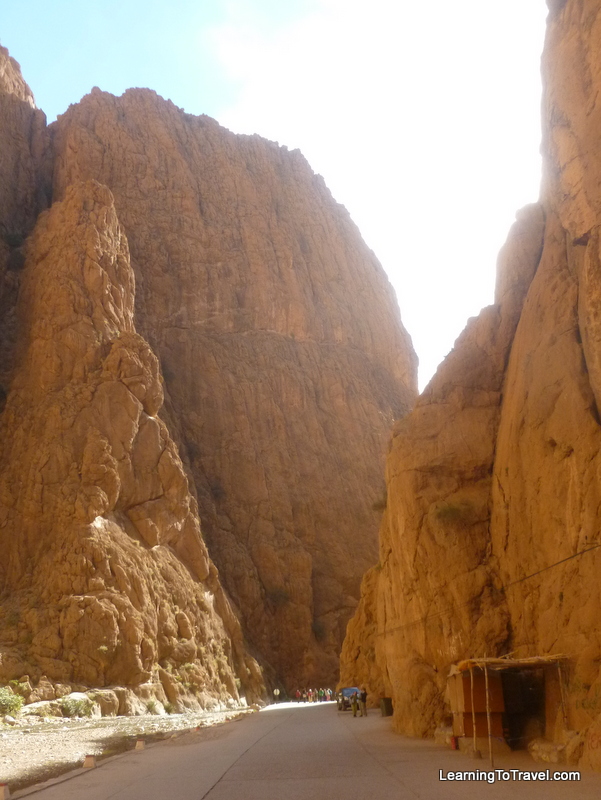 Finally, after the better part of 2 days in a tourist van, we arrived at Erg Chebbi dunes for our camel ride and night in a Bedouin camp. In case you are offered the opportunity to ride a camel, two hours is too long, just my advice. 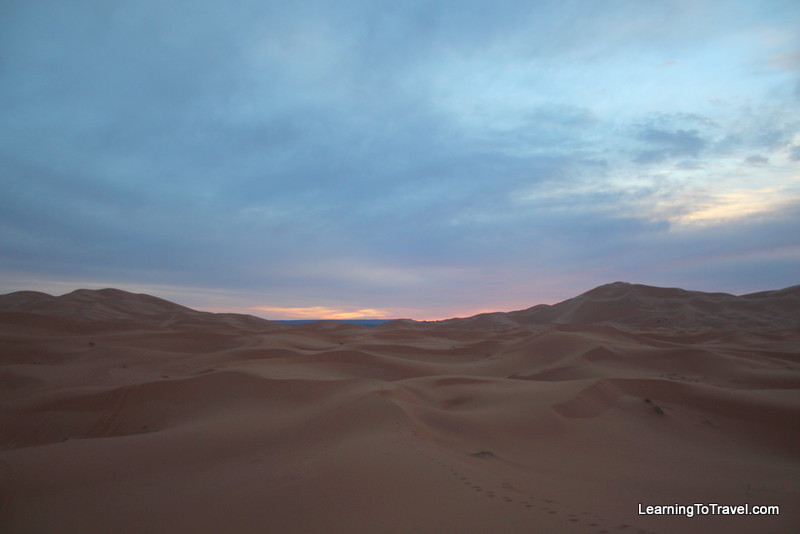 After an extended argument between a stubborn innkeeper and one of our tour participants, we finally boarded our camels and rode into the sunset. 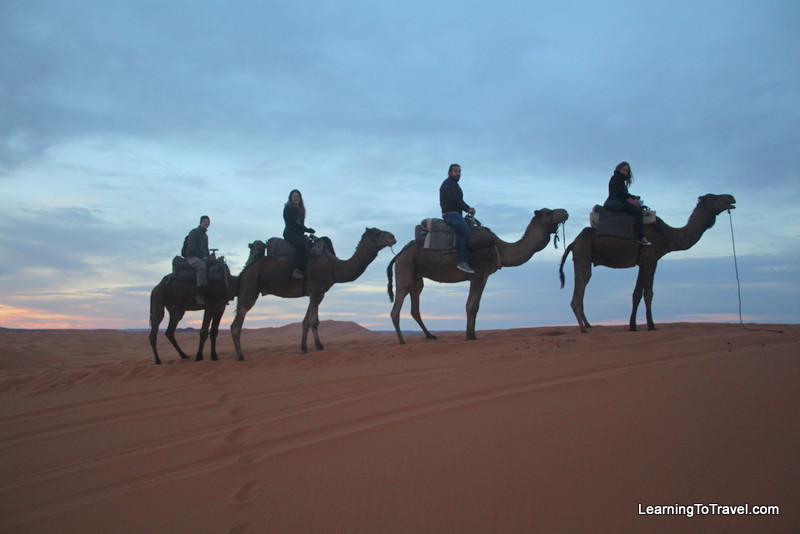 Being a two hour journey, much of it was in the dark, but it was quite peaceful, although I wasn’t entirely certain we weren’t lost. We were shown our tents then herded to the oddest dinner I’ve ever  experienced where I shared a plate of rice and then stew with several complete strangers. We did each get our own fork. 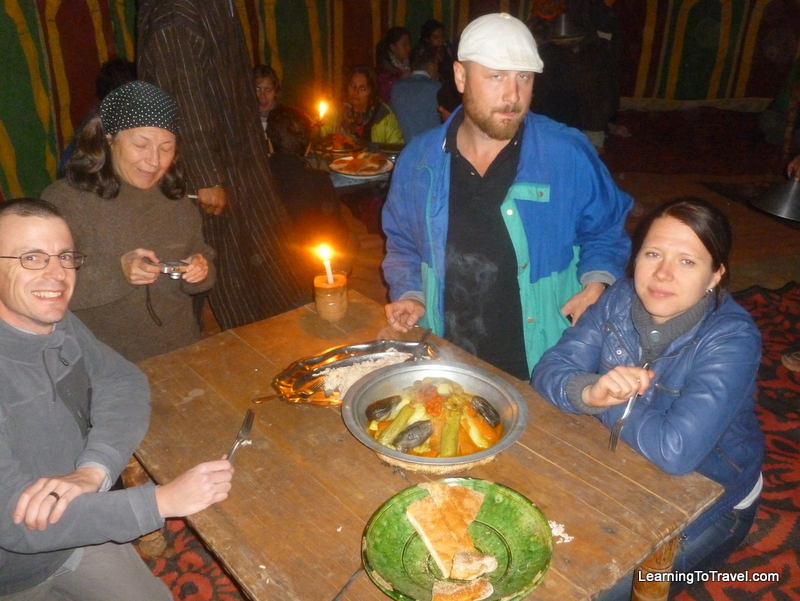 We were all good-natured and an in-this-together mentality prevailed, but this could have been a much more enjoyable experience if it had started out with some type of explanation about what we were eating, what was going to happen while we were at camp and how this was an authentic Bedoiun experience. Instead a plate of rice was unceremoniously plopped down in front of us along with 5 forks and a “Bon apetit” while we all looked on wondering – Is there more coming? Are there going to be plates maybe? There was more coming, a plate of tagine with a piece or two of chicken showed up when the rice was mostly gone. There were not plates.

After dinner someone asked where the bathroom was (we we’re all wondering but afraid to ask) to which one of the camel herders answered with a sweeping hand gesture and said “Everywhere.” That’s what I thought…

No one shared any information about when we were leaving in the morning, that there might be an option to take a 4WD instead of a camel or anything useful. We overheard a conversation about the 4WD option and asked the camel herder we heard it from a bit later and were chastised for not asking sooner because now “all the spaces are full”. And I’m not trying to be disrespectful by referring to the guy as “one of the camel herders” but no one was ever introduced or really even talked to us. They didn’t seem to know much about what tourists might expect or care much about whether their clients had a good time. It was quite an odd feeling and not at all reassuring 2 hours out in the Sahara.

The exception is Omar who we actually enjoyed hanging out with for a bit after dinner and enjoyed a nice conversation. I was glad to have him recognize us in the morning and choose to lead our string of camels on the return trip. 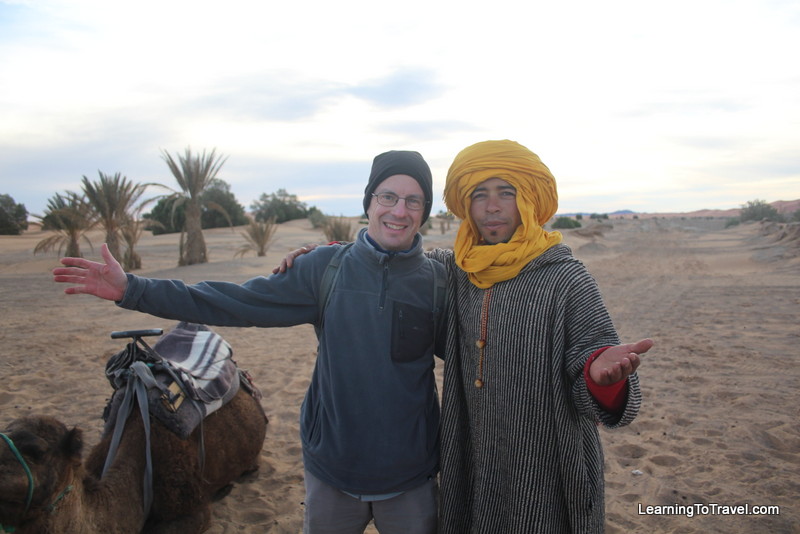 At 6am we were back on the camels for the two hour trek back to the bus. This was the most beautiful sunrise I’ve ever witnessed, with reds and oranges more vibrant then I’ve ever seen and all from the back of a camel, made it quite a memorable experience. 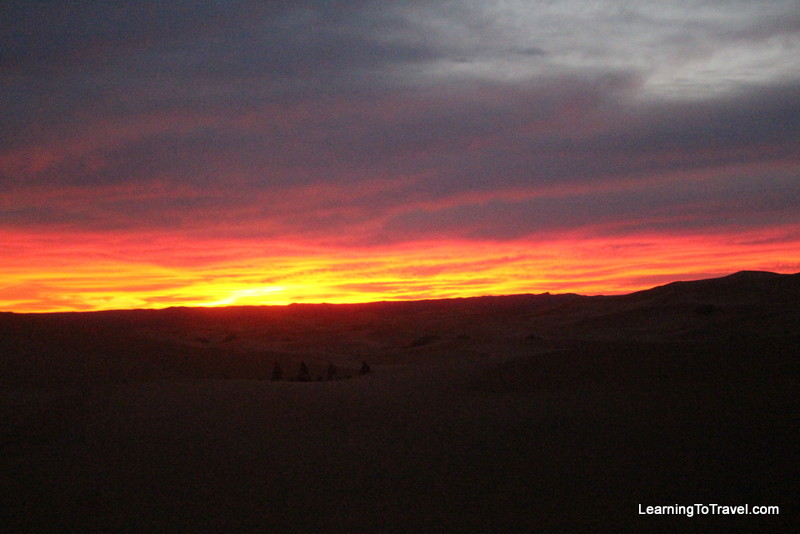 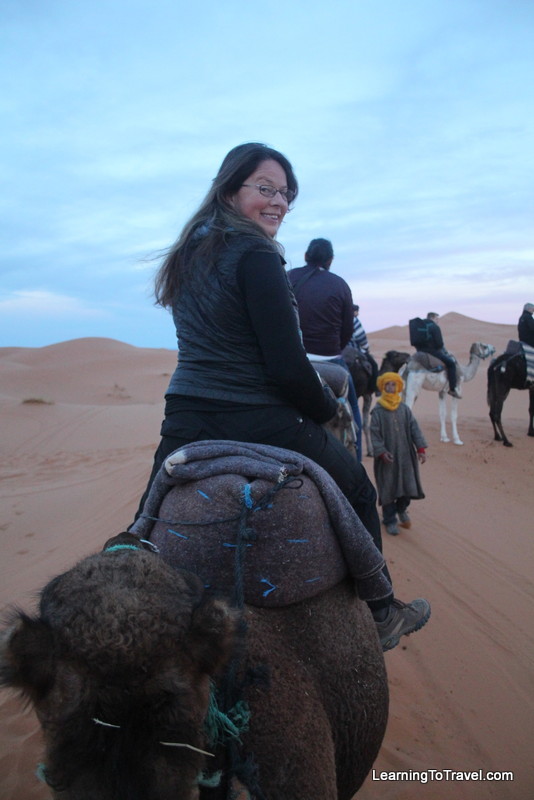 So in the end, this was a horrible tour on which I still had amazing and memorable experiences. Some of them memorable in a good way and others in a comically bad way.

In general there was a lack of communication. Where are we going? What are we doing now? What do we need to take with us? To get any information from our driver took the repeated asking of the question. The feeling I got was that our desire to know what was going on was amusing to him. Possibly a cultural difference, but since this was a tour – for tourists – I thought the needs of the tourists should be addressed a little better.

The biggest confusion was when we got to the camel rendezvous – would our bags be taken to camp in a 4WD or would we only have what we carried on our backs? Turned out it was only what was on our backs, but no one ever told us that. Important information to have before you spend a cold night camping in the Sahara in December. We sensed something might be amiss and asked our driver with about 6 requests for clarification before we got an answer we understood. I had just enough time to throw on all my layers and stuff my toothbrush in my pocket.

In addition to looking into reviews of tour companies, I’d also recommend getting a more detailed itinerary. The description of this tour was pretty vague and did not include a timetable of any sort, so we didn’t realize how much time we were going to spend in the van or how much distance we needed to cover. We spent most of the 3 days in the van and the overnight bivouac/camel ride, was followed immediately by a 12 hour drive back to Marrakech on these highways. 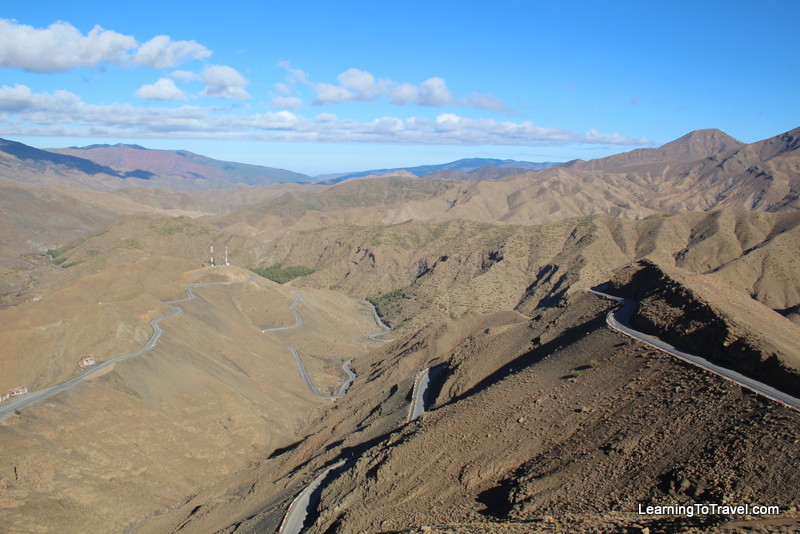 I would still take the tour, but with a different tour company and a little more information. I just would have liked the chance to be mentally prepared for what was coming.