Two weeks ago, Daryle and I went out to breakfast and then spent every bit of our Saturday, which also happened to be our 11th anniversary, pulling out, sorting and giving away what I estimate were about half our remaining earthly possessions. We arranged it all in our living room and invited friends over to have a beer and take some stuff. 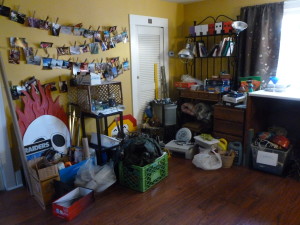 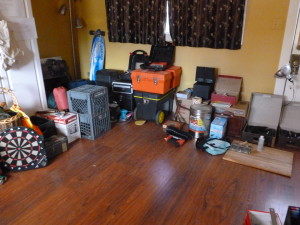 Since we’d only given 24-hour notice on our ” Almost Everything Must Go” party, we still had quite a lot left on Sunday morning. However, we quickly learned that a big blue tarp in the driveway and a “Free” sign goes a long way in making things disappear. (For those who missed the party, there will likely be another in the next few weeks…we’ll try to give more than 24-hours notice.)

So far, the giving away of “the stuff” has been far easier than I anticipated, fun even. Overall, I’ve been surprised at how much we have and how much I don’t miss 99.9% of it when it’s gone. I know at some point I may freak out and refuse to get rid of another thing, but so far its been pretty smooth sailing. (Knock on wood.)

Once we moved our giveaways to the driveway, we spent a long Sunday cleaning so that as of Tuesday evening – Our house is listed for sale!

There’s still a lot to go, but we are making huge progress. And that’s a good thing because we’re down to 54 days until that plane takes off for Mexico.