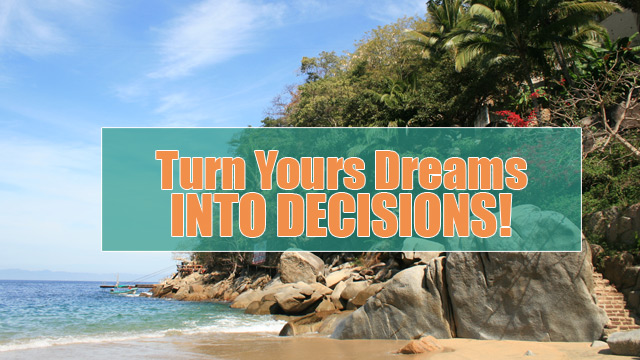 Turn Your Dreams Into Decisions

Since we announced the plans for our trip the reactions and comments from people have been interesting. The most common comment I’ve gotten is “I am so jealous, I’ve always dreamed of doing that.” or some version of that sentiment.

This is often followed up by questions that relate to the mechanics, how-to, and logistics of doing such long term travel. There are a lot of steps and a lot of things that we had to do to make it happen. Such things as clever use of airline credit cards, selling items around the house on eBay, and creating online passive income streams, just to name a few.

But the most important thing we did was change our dream of long term travel into a decision to travel long term.

It was early in 2012 either during our two week trip to Mexico or shortly after that we decided that 2013 would be the year of travel and we set the deadline of April 1st to make it happen. That is when the true planning began because we had a very specific target to aim for.

No longer did we say things like “I wish I could travel more.” or “I really want to go to London someday.” Because we had decided to do it and thus knew it was going to happen.

After committing to the plan of traveling every little decision was done through the lens of the trip.

For example over the course of the year both Joyce and I became tea drinkers. Without the lens of the trip I probably would have bought an electronic kettle and a tea pot in order to “properly” make tea. But through the lens of the trip I decided that we could make do with the stove top kettle we already owned and no tea pot because the money spent on those would be better saved for one day having proper tea in England.

For me it has been a very powerful lesson.

Because once it became a decision the wiring in my brain upgraded to truly work towards completing what I decided on.

I feel it also helps to share that decision with those who you know will support you. In our case we had to wait several months before we could openly share the news but once we did the support came streaming in. I am very thankful for that because a trip like this could not happen without the support of others. In fact that will be a reoccurring theme I will be writing about here as we find ourselves on stranger’s couches around the planet.

So take some time to examine the dreams you have for your life and think about which ones you can make into decisions.

I know you have some that you can decide on now and begin working towards them. Life is simply too short and too fragile not to.