I’ve always had a special affinity for sea turtles and judging by the prevalence of turtles on everything from jewelry to bumper stickers to Pinterest tattoo design boards, I am not alone.

Before our recent trip to South Florida, I was reading up on things to do and came upon The Turtle Hospital in Marathon. About halfway down the Keys, midway between Miami and Key West, Marathon fit perfectly into our travel plans.

The Turtle Hospital offers 8 tours a day, seven days a week and an official tour is the only way to see the inner workings of the center and to meet the turtles themselves. Each tour lasts about 90 minutes and takes groups of 10-15 past a series of tanks from individual 150-gallon isolation tanks to the 100,000-gallon saltwater pool for permanent and long-term residents. Each tour ends with a chance to feed the permanent resident turtles. 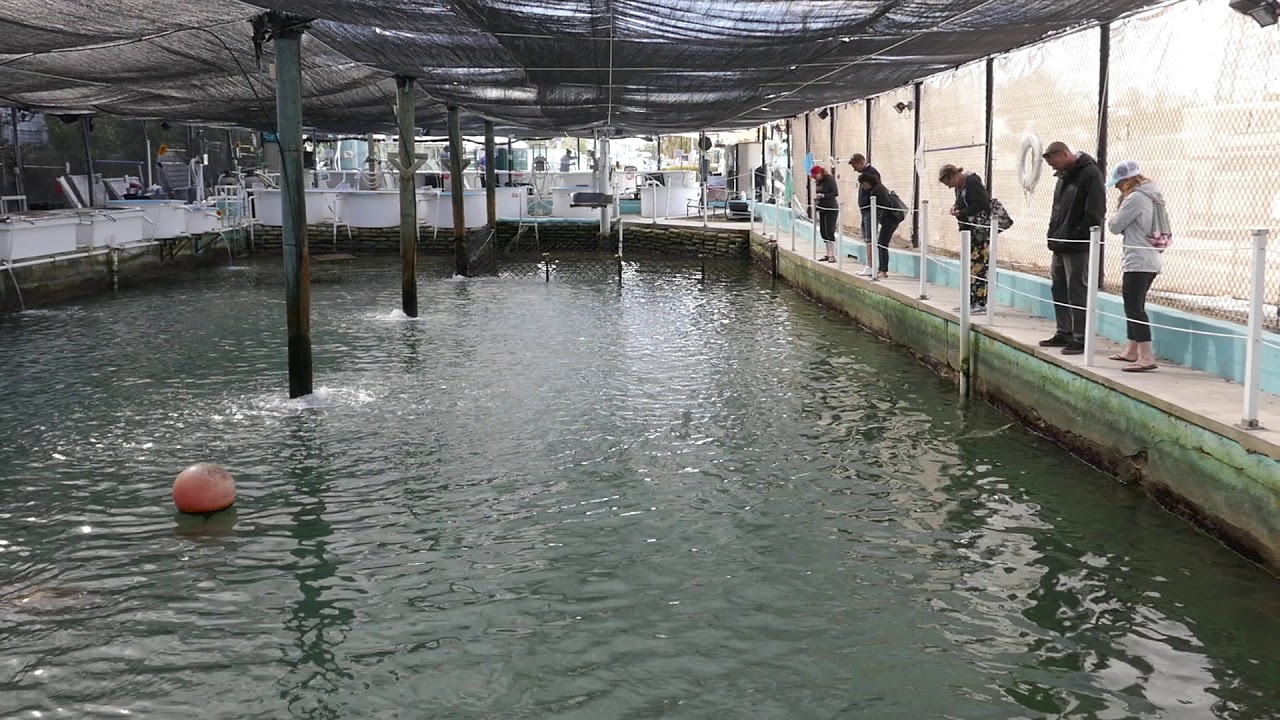 The first tanks we saw were two 30,000-gallon “hurricane tanks”, where residents recently weathered Hurricane Irma. In addition to serving as a shelter during hazardous weather, these tanks also serve as physical therapy tanks for turtles on their way back to the ocean.

Two additional areas are filled with individual tanks which serve as isolation tanks. One series houses animals in recovery from traumatic injuries like boat strikes and fishing line entanglement as well as intestinal blockages. A second series of individual tanks is designated specifically for turtles affected by the fibropapilloma virus which causes tumors that can impair vision and flipper mobility.

Finally, there is the 100,000 gallon saltwater pool for long-term residents with permanent disabilities that won’t allow for return to the wild. A few of these turtles will stay at The Turtle Hospital for life, but most will be adopted by zoos and aquariums, allowing space at the hospital for more turtles that need their life-saving help.

On our tour, we were able to meet a number of current residents – I’d like to introduce you to a few and at the same time illustrate the most common threats to sea turtles:

Booga, a loggerhead sea turtle who was discovered by a boat named “Booga Man,” had a flipper that had become entangled in a lobster trap line sometime before Hurricane Irma. By the time the crew of the “Booga Man” found him post-hurricane, the blood flow to the flipper had been cut off long enough that the flipper was already dead. The Hospital performed amputation surgery and although you might think that would make it difficult for Booga to return to life in the ocean, three-flippered turtles can actually do just fine in the wild. Booga was in recovery when we met him and once he put on some more weight, he’d be going home to the ocean. More often than lobster trap line, monofilament fishing line is the culprit in turtle entanglement, so if you fish, please make sure to dispose of your line properly. 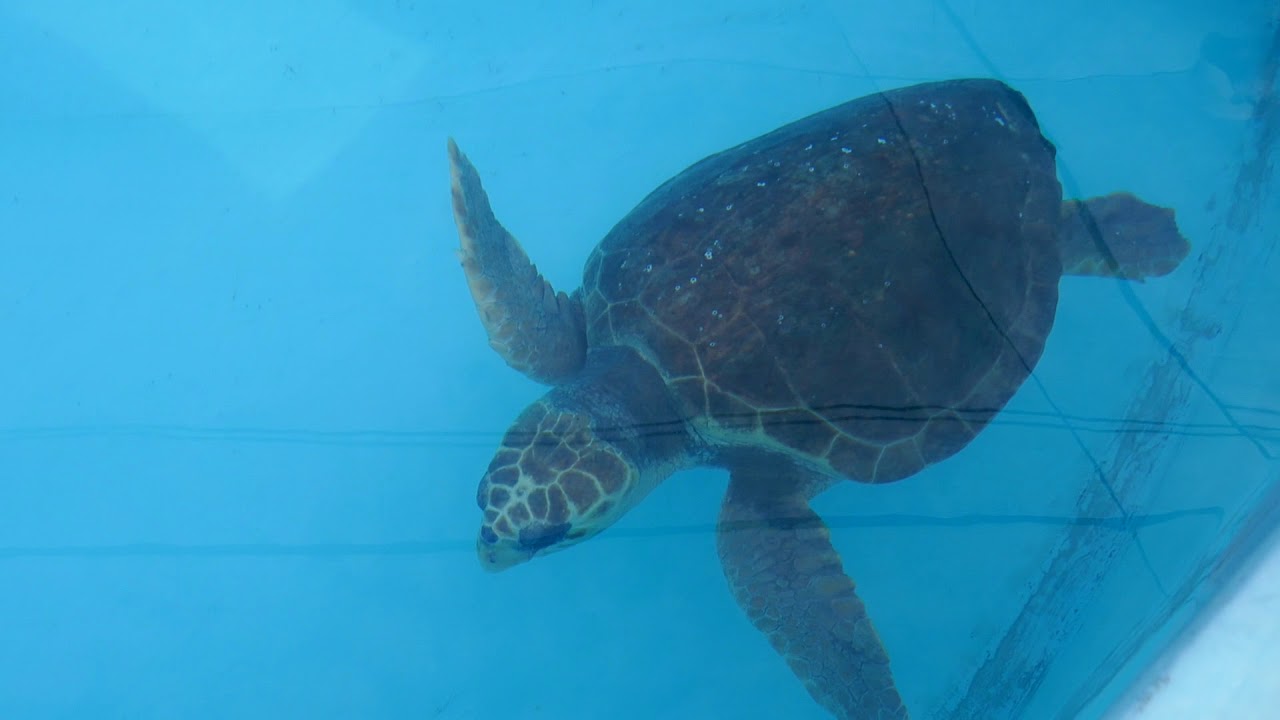 Turtles are curious and they’ll put about anything in their mouth to sample it. Unfortunately, as our oceans have gotten more polluted with everything from plastic bottles to stray flipflops, a lot of undigestible things are ending up in the guts of turtles. This can cause an impaction in the digestive system. Impactions can occur from natural diets too – sometimes the crunchy shells of tasty mollusks can build up in there too. In either case these impactions cause gas. This is a big deal to a turtle because it makes them buoyant and can put them off balance. Buoyancy makes it difficult to dive down to feed and to avoid threats, like predators and boats. In addition, as the gas moves through the digestive tract it moves back and forth from left to right, putting the turtle off balance and making it difficult to maneuver. It can take months for the gas to work its way through a turtle’s digestive system and in the meantime, they’re very vulnerable.

When someone in the local community notices a turtle floating in the wild, they call the Turtle Hospital. There are staff who are always on call and who will go out to catch the turtle and bring it back to the Hospital. The Hospital gives these turtles a safe place to work through their issues along with some help in the mundane and somewhat unexpected form of Metamucil and Beano, among other things. We met Dusenberry, also a loggerhead, who was recovering from a natural impaction when we visited. The Velcro strips on the sides of his shell allowed weights and floats to be attached and adjusted to restore his balance as the gas worked through his system. The shallow pool also made sure he didn’t have to work very hard to pop his head out to breathe, so he could put all his energy to recovery.. 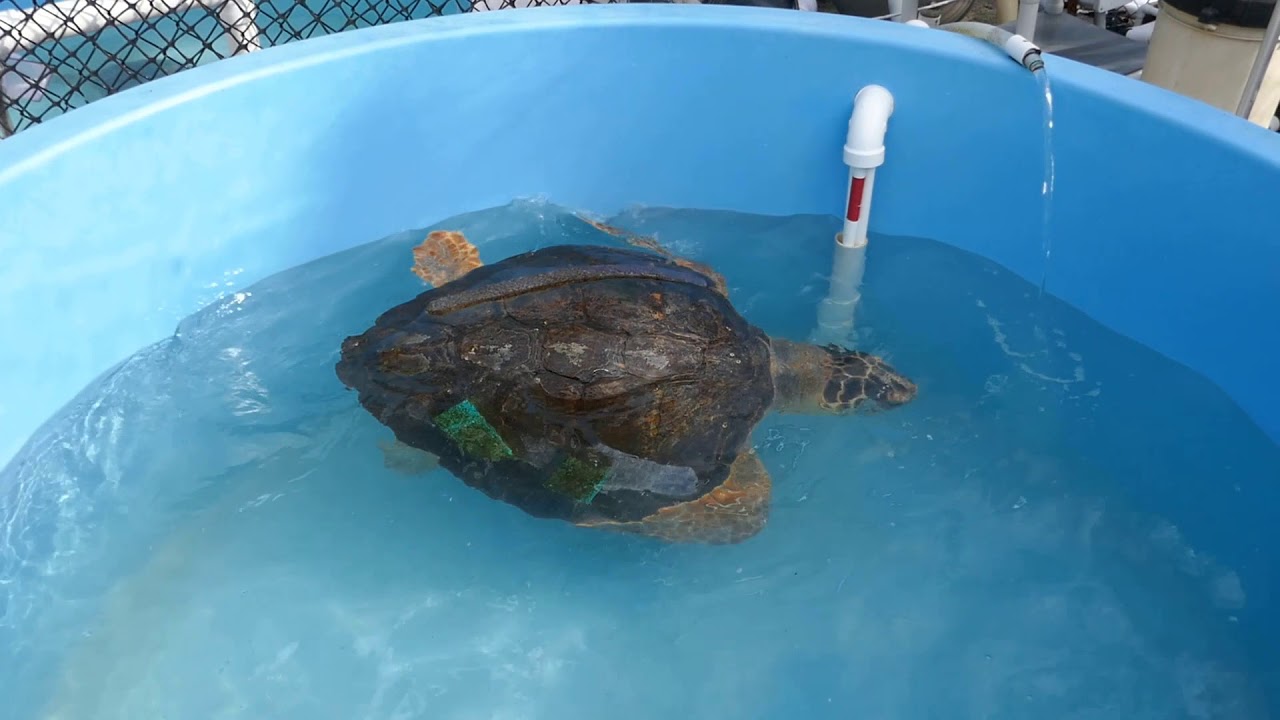 Unfortunately, in an ocean shared with humans, there are sometimes collisions between boats and turtles, causing everything from nicks and cuts in the turtles’ shell, to paralysis, and something known as “bubble butt”. Because a turtle’s spine is fused to its shell there is always the chance of paralysis and sometimes digestive tract issues with a traumatic shell injury. Many times, a boat strike causes an air pocket to be introduced under the shell and the resulting air pocket affects buoyancy, making it difficult for the turtle to dive, a bit like wearing a life jacket. This is “bubble butt” and unfortunately it is a permanent condition so if it’s severe enough, the turtle isn’t able to return to the wild. The Hospital can help to balance out the turtle with weights attached to its shell to offset the buoyancy of the air pocket, but because turtles’ shells keep growing throughout their lifetime and are molted gradually over time, the weights will eventually fall off. Since no one’s figured out how to get the turtles to come back for new weights, they really can’t be safely released and become either permanent residents or adoptees to zoos and aquariums.

Toby is a green sea turtle who was the victim of a boat propeller strike. When we met him, the Turtle Hospital staff was still determining the extent of his injuries to see if he could make a full recovery and head home to the ocean or if he was going to need continued care in a safe environment.  On top of the injury, he also had fibropapilloma tumors that needed to be removed. He seemed to be doing pretty well when we met him though. 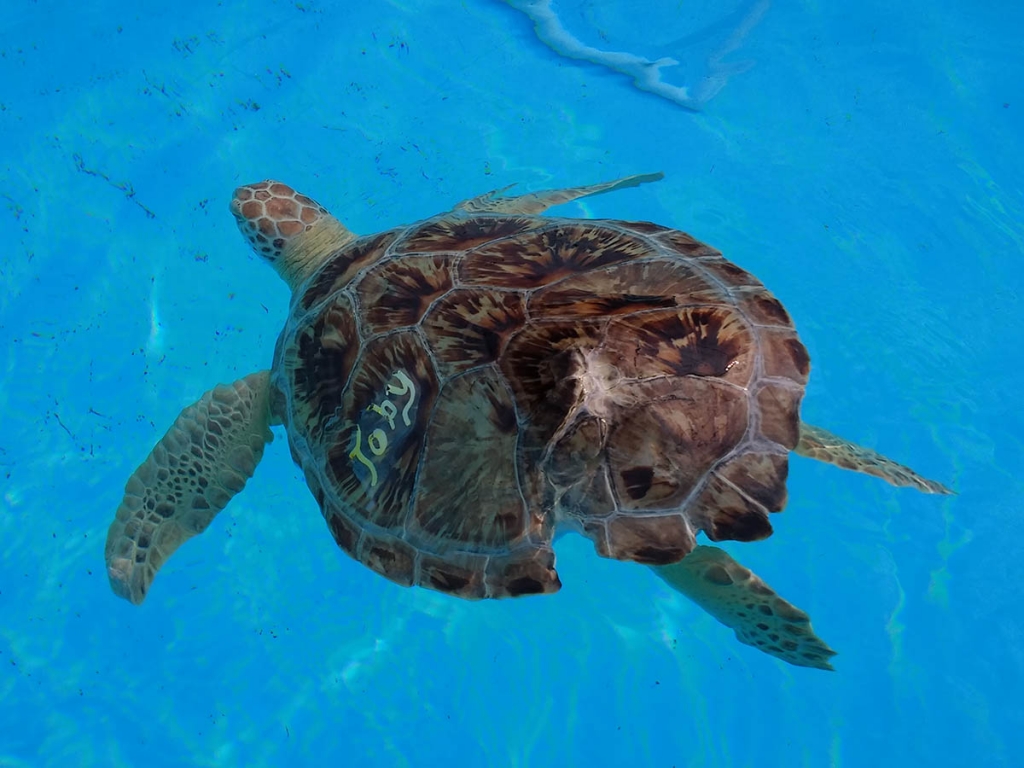 Pretty much all turtles carry the virus that causes fibropapilloma tumors, but in many cases there are no symptoms. In recent years, however, more and more turtles are showing up with tumors caused by the virus. This increased incidence of the tumors coincides with increased water pollution, particularly from fertilizers, and may be due to a weakened immune system. Tumors occur most often on the flippers and head causing difficulty swimming and vision blockage, making it tough for a turtle to carry on with normal activities. Tumor removal surgery is the most common procedure at The Turtle Hospital and many of the turtles we met were in recovery or awaiting further surgeries. If a turtle has a lot of tumors, a series of surgeries will be required. Once all tumors are removed, the turtles are then monitored for a full year to be sure they stay tumor-free before being released back to the ocean.

We met No Name and Pawel, as well as five juvenile green sea turtles who were in different phases of this process.

No Name, who was found in the waters off No Name Key, is a green sea turtle who came in with eye tumors that totally covered both eyes and a large number of tumors on her flippers as well. Although she’d already had the worst tumors, those covering her eyes, removed when we met her, she was still waiting for three or four more rounds of surgery to take care of the rest. 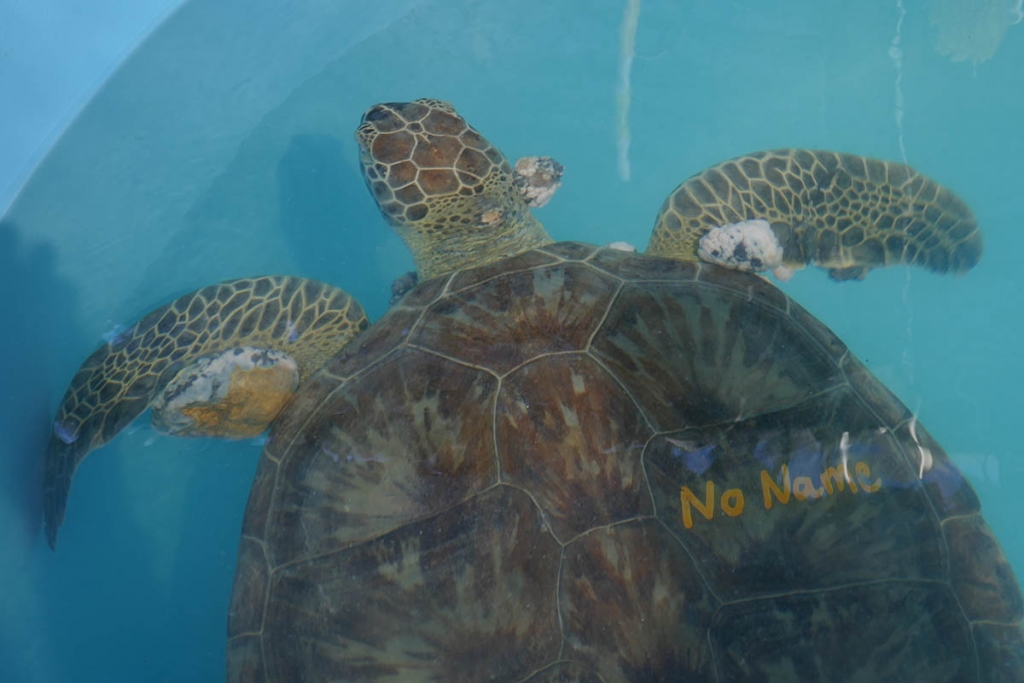 Pawel, a green sea turtle who was found by a night kayaking tour, had just undergone her final surgery for flipper tumors, but was still waiting for another to take care of her eyes. She was recovering in one of the isolation tanks with some floats added to her shell to help keep her balanced while she recovered. 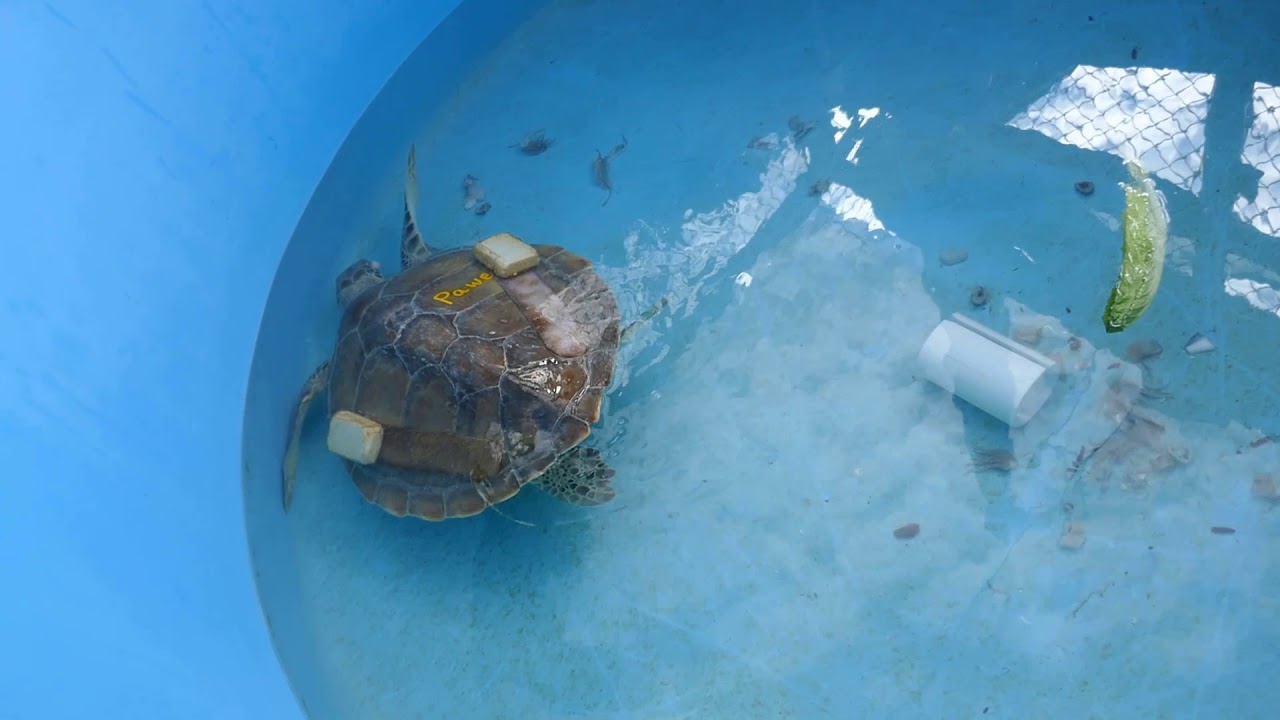 Five Juvenile green sea turtles, including Toby were tumor-free and in the one-year waiting period following surgery. Keith, Nereus, Huckleberry, Tortuga and Toby were sharing one of the hurricane tanks and staying active in preparation for their return to the ocean. 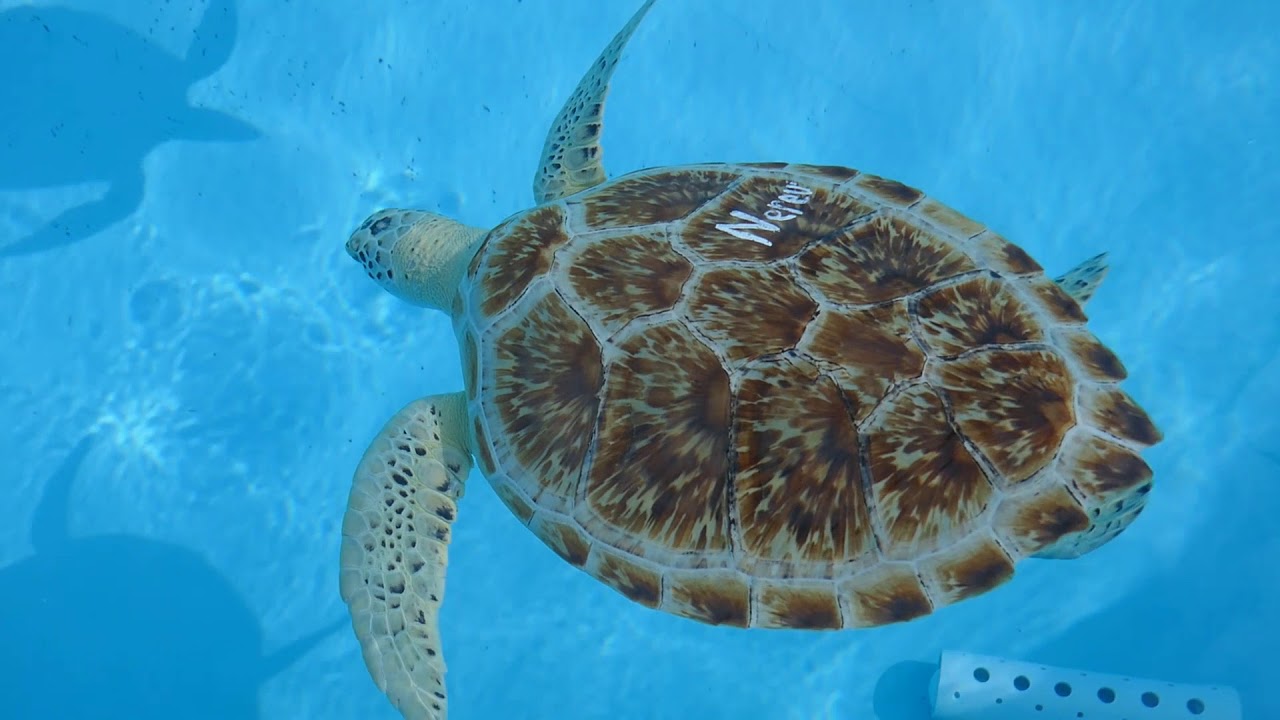 The Turtle Hospital is run largely through donations, tour fees and gift shop purchases and although the Hospital does have a local vet on call for emergencies, all the surgeries are done by visiting volunteer vets. There are 17 people on staff, including admin, management, tours, and rehab, and some are on call 24/7 to head out to rescue a turtle whenever the call comes in, day or night.

The Hospital started out as a motel with a saltwater pool in the 1950’s. In the 1970’s the owner turned the pool into a “snorkel experience” with fish and small saltwater animals. With the popularity of the Teenage Mutant Ninja Turtles in the early 1990s, people started requesting that he add a turtle. When he looked into this he learned that there were a lot of permits required to have a turtle and that one way was to qualify as a rehabilitation facility. From this, the Turtle Hospital was born.

In the beginning, there was a rehab facility in the back and motel rooms up front with surgeries done in the rooms in between check out and check in. Although Hurricane Wilma in 2005 put an end to the motel, the rehab goes on. There is now a full surgery suite and the motel rooms are used to house the rehab staff and visiting volunteer veterinarians.

If you love turtles, or even just like them a little bit, I highly recommend a visit to The Turtle Hospital. The $25 fee is well worth it and is undoubtedly going to a good cause. You’ll learn a lot and you’ll meet some charismatic and beautiful animals that need our help.